Back in 1988, during the presidency of Ronald Regan, the Anti-Drug Abuse Act of 1988  was established with aim of creating a drug-free USA. The driving force behind the initiative was the Office of National Drug Control Policy (ONDCP), which had a role to set and implement national strategy as well as setting budgets. The objective of the act was, ‘to seek to reduce drug abuse, trafficking, and their consequences. Specifically, drug abuse is to be curbed by preventing young people from using illegal drugs, reducing the number of users, and decreasing drug availability.’

Since its inception the ONDCP has been granted ever wider powers and, by law, the Director of the organization now also evaluates, coordinates, and oversees international and domestic anti-drug efforts of executive branch agencies, as well as ensuring that anti-drug activities are sustained and are complemented by activities at state level. The Director advises the President regarding changes in the organization, management, budgeting, and personnel of Federal Agencies that could affect the Nation’s anti-drug efforts; and regarding Federal agency compliance with their obligations under the Strategy.

This organization, together with the 1988 Act that initiated it, have been the power house behind the American ‘war on drugs’ ever since.

There have been many updates to ONDCP policy over the intervening years all of which can be accessed on the ONDCP site. In order to keep the site readable, however, we’ll just concentrate on summarizing the 2010 National Drug Control Strategy.

The latest strategy promises a ‘new, balanced approach,’ based on President Obama’s pledge to, ‘restore balance in our efforts to combat the drug problems that plague our communities.’

Key objectives of the 2010 Drug Control Strategy are to:

For the financial year 2011, the ONDCP have requested $15.5 billion ‘to reduce drug use and its consequences in the United States.’

It seems the only change in America’s drug policy is the ending of the term ‘war on drugs;’ a term coined by Richard Nixon back in 1971 but which President Obama believes is ‘counterproductive.’

So, why is cannabis illegal? In his book The Emperor Wears No Clothes, marijuana activist Jack Herer explains:
In the mid-1930s, when the new mechanical hemp fiber stripping machines and machines to conserve hemp’s high-cellulose pulp finally became state-of-the art, available and affordable, the enormous timber acreage and businesses of the Hearst Paper Manufacturing Division, Kimberly Clark (USA), St. Regis – and virtually all other timber, paper and large newspaper holding companies, stood to lose billions of dollars and perhaps go bankrupt.

At the same time:
DuPont had just patented processes for making plastics from oil and coal, as well as a new sulfate/sulfite process for making paper from wood pulp. According to DuPont’s own corporate records and historians, these processes accounted for over 80 percent of all the company’s railroad car loadings over the next 60 years into the 1990s.
Put simply, the facts were:

Little wonder these two businesses were running scared. Hearst, of course, was in an ideal position to mount an anti-cannabis media campaign, which he did on a grand scale.

Hearst headlines, such as ‘Marijuana goads user to blood lust’ and ‘Marijuana – Assassin of Youth’ played into the hands of Anslinger, who cited marijuana as ‘the most violence causing drug in the history of mankind.’

The direct consequence was that, in 1937, the marijuana tax act was adopted by congress.

The latest marijuana news in the States, as far as legalization is concerned, is Proposition 19, the Regulate, Control and Tax Cannabis Act of 2010.

Proposition 19 is a California ballot proposition that appears on the November 2, 2010 California statewide ballot. The act seeks to put the onus for marijuana regulation on local government, permitting them to impose and collect marijuana taxes and fees as well as authorizing a range of criminal and civil penalties.

In order to pass, Proposition 19 requires a simple majority and, if passed, would take effect on the day after the election.

Marijuana Statistics’ for the USA 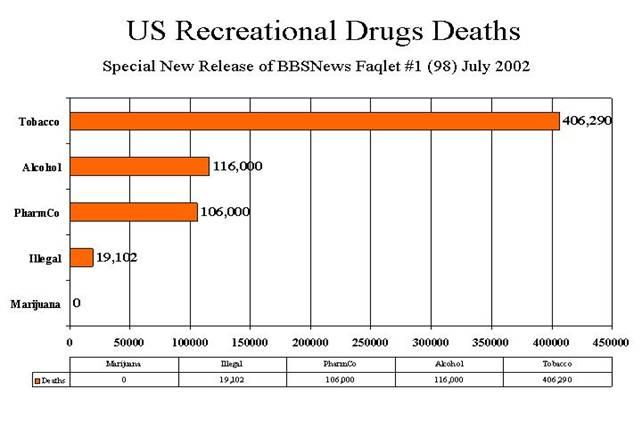 Continuous long-term smoking of marijuana can cause bronchitis, but the chance of contracting bronchitis from casual marijuana smoking is minuscule. Respiratory health hazards can be totally eliminated by consuming marijuana via non-smoking methods, i.e., ingesting marijuana via baked foods, tincture, or vaporizer.

Legalize Cannabis – Sites for and against marijuana.
Medical Marijuana – Find out the truth about medical marijuana at Medical Marijuana Blog.
Cannabis Vaporizer – Premium herbal vaporizers at very low prices.
Grow Marijuana – Knowing how to grow weed will give you pure cannabis, free from additives.
Marijuana Prices – Fascinating site that reveals marijuana prices and which states have the highest rates of marijuana use in the USA.
Cannabis Recipe – award winning cannabis recipes from around the world.
Cannabis Vodka – Cannabis Vodka is a unique alcoholic drink; a mild spirit made from cereal alcohol, treated water, sugar and hemp seeds